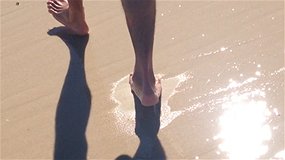 With many spending time at the beach over the summer have you ever noticed this amazing phenomenon. Ever wondered why when you tread on wet beach sand it looks dry?

“Pressing one grain causes it to press against its neighbours which will force them move in some way. This movement will, in turn, cause that grain’s neighbours’ neighbours to move as well and so on. Pressing any one grain therefore indirectly presses many other distant grains. How will these irregular little grains of stuff move? The pressing results in a lever action that causes each grain to partially rotate. It’s all the tiny, imperceptible rotations of all those little grains that collectively cause the volume of the bulk of the sand to increase. The grains literally push each other slightly further apart creating more space between them. Liquids always flow down due to the force of gravity and when the water drains in to fill those extra spaces, you see a temporary dry impression around your footprint on the surface.

Here’s another way to put it. Before you step on wet sand, the grains are packed together in a very tight arrangement. Your footstep reduces the packing density of the grains under pressure. Sand is more dense than water so after you remove your foot, gravity weaves its magic and those grains settle back into a more densely packed arrangement leaving less room for water.”
ABC Science – Surfing Scientist